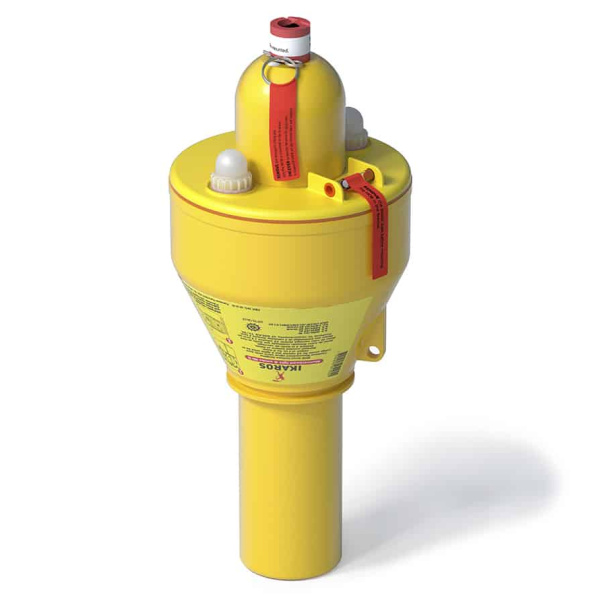 The MOB distress signal is designed to be mounted vertically on the ship’s bridge, with one on the port and one on the starboard side.

It should be attached behind or to the side of a lifebuoy at a minimum of five meters above the water line. When the lifebuoy is thrown overboard, the MOB is pulled with it and as it leaves its bracket,
it automatically emits light and smoke to attract attention to the person in the water. On smaller vessels, it can be mounted on the wheelhouse bulkhead and launched manually.

The MOB light and smoke signal has a lithium battery and can be used as a day and night marker. It is approved globally and meets the latest SOLAS regulations.

The Ikaros range of lifesaving signals

Lifesaving signals must be reliable. They have to work. Also,the instructions must be clear and easy to understand, and they must be easy to handle. Because in distress situations nothing can go wrong – your life depends on it. Ikaros has produced lifesaving signals since 1888; our products are globally approved and they meet the demanding SOLAS* requirements.

*International Convention for the Safety of Life at Sea

Swedish safety at sea since 1888

In 1888 Carl Robert Hansson founded Hansson PyroTech in Gothenburg. In the beginning, fireworks were the basis of the business, but in the 1890s the company also became known as a skilled and reliable manufacturer of ship’s signals (blue lights). The product range was extensive and by the beginning of the 1920s the company was already producing all types of signals then available on the market, such as parachute rockets, blue and red lights, signal guns and lifebuoy lights.

But it took a disaster to bring safety into serious international focus. On the night of 14 April 1912, the liner Titanic hit an iceberg and sank with a massive loss of life. Two years later, as a direct result of the Titanic disaster, the first international conference on marine safety was held in London. Thirteen countries signed the first set of regulations – Safety of Life At Sea (SOLAS).

In 1959, a product was launched that would lay the foundation for Hansson PyroTech’s position as the world’s leading manufacturer of pyrotechnic distress equipment for use at sea. The Ikaros rocket signal revolutionized the market with its innovative design and rocket technology. Ikaros became a new concept and set the standard for hand-fired rockets.

Today, the complete brand and product family has taken the name of this ground breaking invention, Ikaros, and we lead the world in distress signals for ships and leisure boats.